Historic Grace Episcopal Church stands at the site of one of the earliest colonial churches in Virginia. A “mountain chapel” had first existed on the premises, having been built by the earliest settlers in the area, probably in the 1730’s. The Vestry of the Fredericksville Parish of the Church of England later commissioned a church for this site in 1745. First known as the Middle Church, and later called Walker’s Church, foundation stones of this church, constructed of wood and completed in 1748, are visible today in the front yard of the present structure.
​
​  Built by Mr. Francis Smith for a fee of £80, this wooden building measured 32 feet by 24 feet. The Fredericksville Parish included the original church and two other churches in Albemarle and Louisa Counties. The Rev. James Maury became Rector of the Parish in 1751 and conducted a classical school at his home. Thomas Jefferson attended this school in 1757 and 1758 and later served as a member of the Vestry of the Fredericksville Parish from 1767 to 1770. Vestry members selected ministers, cared for the poor and mentally deficient, set land boundaries, and required residents to pay a levy of tobacco or cash to support the church.
The present building was named Grace, designed and built in the Gothic Revival style by the architect William Strickland, at a cost of $20,000. It was consecrated in 1855, burned forty years later, and was re-consecrated in 1896. The fire in 1895 left only the tower and four walls standing, and these were incorporated into the present structure when the church was rebuilt. A 1,575-pound bell was salvaged from the ashes and is still in use.

​  The Parish House was constructed in 1933, and an expansion in 1971 was named in memory of the Rev. Frank Leslie Robinson who served as Rector from 1910 to 1942. A further expansion in 2002 included a great room for use by the over 200 church members and for community functions.
​
​  All Saints Chapel was built in 1929 as a mission to Stony Point. A parish hall was added there in 2016. Grace Church and All Saints Chapel worship according to The Book of Common Prayer which has a long history of use, dating back to ancient Christian sources and the English Reformation of the 16th century.
​The first annual Blessing of the Hounds service was held at the church in 1929. Each Thanksgiving Day this colorful ceremony brings together fox hunters and their horses and hounds in the church yard for prayers and thanksgiving. The annual Grace Church Historic Farm Tour, “Beyond the Gates”, was established in 2010, inviting people from near and far to visit some of the beautiful farms in our area, as well as the Keswick Hunt Club and Grace Church. Proceeds from this event provide personal and financial support for the Church’s outreach efforts, including the monthly food closet, Habitat for Humanity, the Salvation Army, Meals on Wheels, the Boys and Girls Club, the Stony Point Elementary Food Project, and many others.
Grace Church is a diverse congregation from many different backgrounds engaged in worship, great music, fellowship, Christian formation, and outreach to the community, including our food closet and the annual Farm Tour. We open wide the doors of the church to all who desire sincerely to worship the eternal God whom Jesus revealed. We offer our church for the cure of souls who doubt and for the persuasion of those who have found faith difficult; for the encouragement of the discouraged; for the consecration of the strong; for the inspiration of all who face life daringly; and for the ever-deepening assurance of the life eternal.  ​​

There is a long-standing legend, unconfirmed and dubitable, that an M. Johnson, variously said to have served in the Revolutionary War or the War of 1812, is buried between the two large oaks to the left side of the church door.

Old Families of Keswick and the Southwest Mountains

​Some families have lived in this community for many generations, going back to the 18th century. These include the Randolphs, Pages, Rives, Shackelfords, Maurys, Meriwethers and Walkers, among others. The earliest members of these families are buried in family graveyards on the farms and estates of the Keswick countryside such as Cloverfields, Castle Hill and Bel­voir, but many of their later descendants are interred in the Grace Church cemetery. The oldest graves tend to be located nearest the church.

There are 110 known veterans buried in the cemetery. At least 25 served in the Army, 10 in the Navy, 8 in the Marine Corps and 7 in the Air Force. Their grave markers also reflect that 21 were junior enlisted, 9 were non-commissioned officers and 28 were commissioned officers including three lieutenant colonels, three colonels and one brigadier general. Regarding the wartime service of these veterans, 8 fought for the Confederacy during the Civil War, 13 served during WW I, 49 during WW II, 6 during the Korean War and 2 during the Vietnam War.
The pride of service of the confederate soldiers is reflected on grave markers identifying their units:
Company B, 19th VA Infantry, CSA, Carrington's VA Light Artillery, CSA, Company A, 12 Battalion, VA Light Artillery, CSA 88th VA Military, CSA, One of Mosby's Men, Company D, 43rd VA Calvary , Pegrams' Company, VA Light Artillery, CSA. There are also graves of two VMI cadets who fought at the battle of New Market.
Captain George Geiger was aide de camp to Brigadier General James Kemper, one of General Pickett's Brigade Commanders at Gettysburg. Wounded during Pickett's charge on July 3, 1863, Geiger was captured, and died on July 17.
Two recipients of the Distinguished Flying Cross are buried here, among others who received awards for heroism. 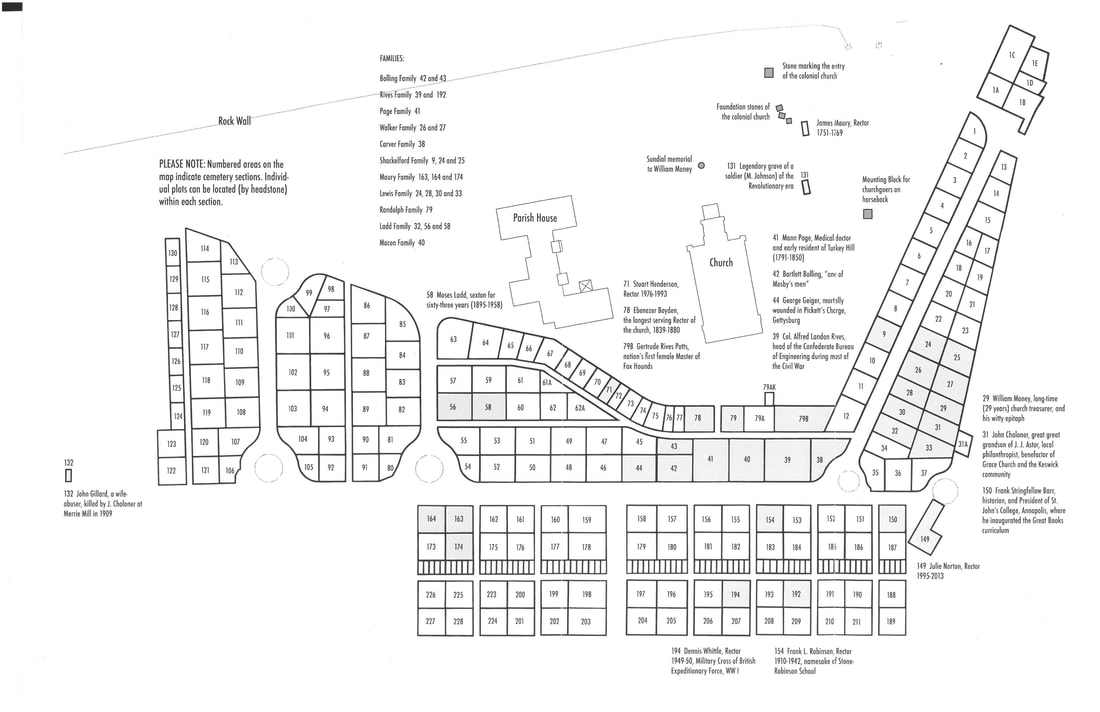 Grace Church and the African Community in Keswick,
Discovering our Historical Heritage 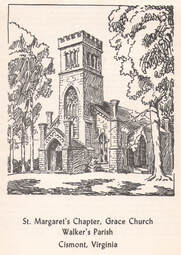