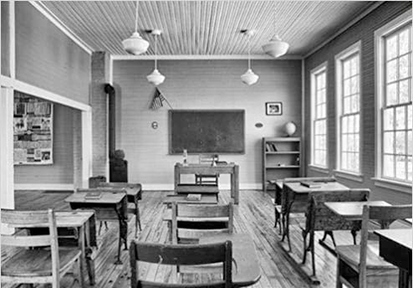 Only 10% of the more than 5,300 schools across the South funded by the Rosenwald School-Building Program from 1912 to 1932 still exist.  One of those is St. John School in Cobham, which educated rural African American children from its construction in 1923 until 1954.  This presentation will recount the movement by school alumni and the local community to save St. John School and the long 11-year effort to renovate the building as the St. John Family Life & Fitness Center for public use.  Becky Kinney, alumna and board president of the non-profit driving this effort, and Jody Lahendro, historic preservation architect, will present this uplifting story. ​
​Extra Reading:
A Better Life for Their Children:
Julius Rosenwald, Booker T. Washington, and the 4,978 Schools That Changed America
by Andrew Feller, 2021

“Born to Jewish immigrants, Julius Rosenwald rose to lead Sears, Roebuck & Company and turn it into the world’s largest retailer. Born into slavery, Booker T. Washington became the founding principal of Tuskegee Institute. In 1912 the two men launched an ambitious program to partner with black communities across the segregated South to build public schools for African American children. This watershed moment in the history of philanthropy―one of the earliest collaborations between Jews and African Americans―drove dramatic improvement in African American educational attainment and fostered the generation who became the leaders and foot soldiers of the civil rights movement. Of the original 4,978 Rosenwald schools built between 1917 and 1937 across fifteen southern and border states, only about 500 survive. While some have been repurposed and a handful remain active schools, many remain unrestored and at risk of collapse. To tell this story visually, Andrew Feiler drove more than twenty-five thousand miles, photographed 105 schools, and interviewed dozens of former students, teachers, preservationists, and community leaders in all fifteen of the program states.”
Additional Contact information:
Joseph Dye Lahendro, FAIA
Historic Preservation Architect
c 434.906.2583; jdl7d@virginia.edu