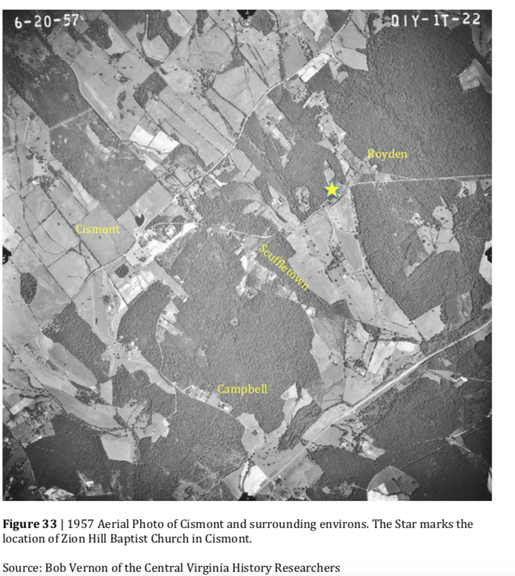 Edited by E. H. Sutton
​Bates: Notable Quotes The following are excerpts quoted directly from “Blurred Lines: African American Community, Memory and Preservation in the Southwest Mountain Rural Historic District”, by Niya M. Bates, Thesis presented to the Faculty of the Dept. of Architectural History of the School of Architecture in Partial Fulfillment of the Requirement for the Degree Master of Architectural History. April 2015. Footnotes copied here refer to images and references in the Bates document, available online: https://libraetd.lib.virginia.edu/public_view/j6731387r
For more information about Ms. Bates visit: https://history.princeton.edu/people/niya-bates
Overview of the Keswick area:
p.16 Churches, especially Baptist churches, were spaces where rural African Americans could practice their faith, hold community meetings and events, and conduct business.18
p.20 The primary focus of this thesis project is the community, memory, and preservation of the rural African American communities on the eastern side of the Southwest Mountains Rural Historic District. African Americans and their families have been in this area for as long as it has been settled. In some cases, enslaved people inhabited the land prior to their white owners. However, the historic district as it currently exists, does not include the majority of historic black communities.
For many reasons, this area has enjoyed an unprecedented level of stability. Many of the African American families that currently live in the historic neighborhoods radiating from the northeastern side of Route 231 have been there for more than a century creating a stable, close-knit community. Black children raised in the era prior to desegregation benefitted from the presence of Rosenwald schools and teachers dedicated to providing lessons in History, English, Math, and various manual trades. Adults were able to find employment within walking distance of their homes. Most of the families in the African American neighborhoods were members of Zion Hill Baptist Church, St. John Baptist Church, or Union Grove Baptist Church. Not all of these conditions existed in other rural African American communities during the first half of the 20th century. Bonded by common work environments, religious practices, and personal relationships, the African American communities in Keswick have persevered through adversity in the Jim Crow South.
Black neighborhoods in the historic community of Cismont are representative of similar rural, and often unincorporated, African American settlements across the state of Virginia. Unlike communities in the Deep South where education and employment opportunities for rural Blacks were few and far between, these communities benefitted from less restrictive and somewhat progressive politics in Virginia. Still, locating the history of the African Americans in this historic district has been no easy task. The most reliable sources of information on these African American communities survives in oral history, collective memory, and church records. Sources of formal documentary information consulted in the process of this thesis project include local tax records, court documents, genealogical databases, census data, and print media archives.21
21 Property Deeds, Plats, Tax Record and Chancery Records can be retrieved at the Albemarle County Clerk’s Office Records Room. 2nd Floor. J.F. Bell Funeral Home has published a digital catalog of their burials beginning in the early twentieth century. The Albemarle Charlottesville Historical Society holds a number of maps, photographs, and recordings specific to local history. The best information about cultural heritage in rural Black communities is passed through oral history and church records. The University of Virginia Special Collections Library is also a repository for local history.


p. 73 At present, there are at least three resource-specific programs available to rural and minority communities. The first program is geared at protecting America’s rural agricultural heritage by encouraging farmers to maintain their barns and use them for modern agricultural purposes. A great program for other areas, Barn Again! would have little to no impact on this historic district because there are relatively few barns. This area, however, is rich in other agricultural outbuildings like stables, smokehouses, dairies, privies, chicken coops, etc.170
Another initiative is the Rosenwald School Initiative. The National Trust Website states:
The National Trust for Historic Preservation's Southern Office is leading
the Rosenwald Schools Initiative... Many communities are now seeking ways to adapt these historic structures—no longer used for schools—to serve new needs. The Lowe's Charitable and Educational Foundation is partnering with the National Trust for Historic Preservation to support the rehabilitation and restoration of Rosenwald Schools.171
There are two of these schools in the Cismont area in the eastern section of the historic district. Both have been repurposed—one as a private residence, after considerable alterations, and the other as a community center, with more sympathetic restorations. Based upon the geographic distribution of Rosenwald Schools throughout the rural south, these buildings could be repurposed to provide services currently clustered in urban areas. If two of the most obvious goals of historic preservation are to encourage economic development and promote a healthier population, as stated in Albemarle County’s comprehensive plan, then adaptive reuse of Rosenwald schools could be a viable tool for bringing services to struggling rural localities.
Call to Action for Preserving History p.77
Beyond preserving cultural traditions is ensuring that cultural memory of these rural Black neighborhoods can be recorded and archived for future generations. Black churches and schools have long been the repositories for photographs, burial records, and oral history of black communities. However, most black schools have long since shut their doors and faded from our collective memory. Many Rosenwald alumni are in their seventies, eighties, and nineties. As the elders of the community pass away, there are fewer and fewer residents to sustain black rural church congregations and no one is collecting historical records from these places before the communities die out completely. Because the state and local governments have benefitted the most from the labor of working-class blacks in rural areas, they have an ethical responsibility to preserve the cultural and material heritage in the historic district.
Need for signage, p. 78
The County should adopt a similar program for rural black neighborhoods and encourage property owners to organize neighborhood associations to govern capital projects that will improve the community.
The County of Albemarle should start a rural preservation initiative that aims to reclaim the colloquial names of rural neighborhoods by placing signage at the entrance corridor for each community. For example, a sign for Scuffletown with an approximate date of establishment could be placed at the intersection of Route 22 and Maxfield Road. The same could be done for the black neighborhoods at Bunker Hill, Clarks Tract, Boyden, Cobham, and Campbell. A project like this would require some documentary research to discover all of the former names that rural historic neighborhoods have, but the names on the signs should correlate with the period of significance for the Southwest Mountains rural Historic District. The County of Albemarle partner with the Central Virginia History Researchers of the Jefferson School African American Heritage Center to conduct research and encourage community buy-in and involvement. Another tenant of this program could be to allow owners to purchase a plaque for each individual house that is located in a historic black rural community, much like century farm markers are used in Louisa County.
p. 81 “Rural black communities existed in the antebellum period and are a part of the same historical narrative as the former plantation houses that have been well served by building centric preservation policy. In order to preserve rural African American historic neighborhoods and architecture, we have to create language that celebrates cultural context and privileges people, narratives, and context over architecture. In a time when Black Americans are marching and rioting to affirm that Black Lives Matter, we should be looking to the historic physical landscapes around us and learning how to avoid perpetuating negative cultural stereotypes of rural African American life. “

(See Image of the Meriwether grant with names of the local farms. Ed Lay, Architecture of Jefferson Country p. 25) 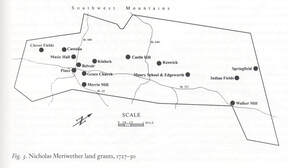 Image of the Meriwether grant with names of the local farms. Ed Lay, Architecture of Jefferson Country p. 25