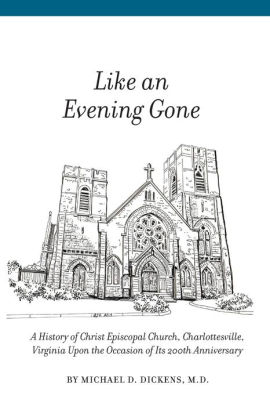 Reflections on the History of Race, Grace & Charlottesville

Introduction:
The following notes include selected excerpts from Dr. Michael Dickens’ history of Christ Church in Charlottesville, including a number of references to Grace Episcopal Church in Keswick. Dickens book recounts church history in the context of American history, the Episcopal Church and its role in race and politics, especially the final chapter which is devoted to the episcopal church and the history of its relations with the black community in Charlottesville. The following are selected notes on Grace Church, and Race from its early colonial history through the civil rights era of the 1960s to the present day with comments from members of the local community who lived through an of civic strife.

Dickens, “All God’s Children: Christ Church and the African American Community”, pp 330-374
“In 1860, there were 490,865 enslaved persons in Virginia. Twenty six percent of free Virginians owned slaves. By contrast eighty four percent of the Episcopal priests canonically resident in the Diocese of Virginia at the start of the Civil War owned slaves.”  (Dickens, p.330)
Notes on research looking in to original property records to find out the facts surrounding possible church ownership of slaves. According to records found through the Diocese of Virginia, Kathie Woods notes:  “With the help of Julia Randle at The Diocese, I located in the 1860 Census Slave Schedules an entry for E. Boyden( rector of Grace from 1839-1880) showing one black female slave 17 years old; one black male slave 55 years old (owned by Thomas Wood (?); one black female 50 years old (Geo. L. Gordon, owner); one mulatto female 35 years old (Mr. Baker, owner); one black female, 19 years old (Mr. Baker, owner); one black male 7 years old (Geo. L. Gordon, owner); 2 black females, 2 years old (Geo. L. Gordon, owner); and one black female, 20 years old (J.E. Drumwright, Robt. Watkinson owner).
I was interested in two things:  first, that there was a category of Mulatto, suggesting interracial liaisons were legally acknowledged.  And second, I guess this can mean that, in addition to the one slave he owned, he rented the other slaves to work on his place, although two were way too young to work.   At the other end of the spectrum, it could mean that he gave them a home when their former masters didn’t want them, or even that he bought them out of slavery. There will be work to do at the (Albemarle County) Courthouse, and maybe things weren’t even written down, making everything speculative!!!”


Dickens, continued: familiar Grace family names included in the history of Christ church.
1819-Edward Coles of Enniscorthy in southeastern Albemarle county (ancestor of Grace Church members Margaret Anderson, Sis Coles Merrick) was a prominent supporter of the episcopal church, and had himself freed all of his slaves and was subsequently elected Governor of Illinois based on his abolitionist views. “The Coles were related to Dolley Madison, and Edward had become James Madison’s private secretary and frequent guest at Montpelier. With regard to Madison’s failure to free his slaves, Coles had spoken of a lifetime of habit and association which had the pernicious effect of lulling [Madison’s] conscience to sleep.” (Dickens, p. 333)
“With the passage of the 15th amendment to the US Constitution in 1870 Black males were guaranteed the right to vote. The male members of Christ Church were coming to grips with the reality of suddenly being in the minority position. In the early summer of 1867 three leading members of the Christ Church vestry, Alexander Rives, N. H. Massie, and Dr. Charles Meriwether made a social visit to Castle Hill to see Rives relatives. After listening to the three men talk, their hostess, Judith Page Rives, wrote to a relative that her guests, after reporting that the physical conditions in Charlottesville during the previous winter had not been too bad, had “expressed great concern at the issue of universal suffrage” of African American citizens…. Another prominent vestryman, university professor John Barbee Minor (on vestry 1854-1874) supported the political compromise extending the right to vote to both newly freed African American males and Confederate veterans. “This was the same Professor Minor who was to help create the first functioning state-wide public-school system in 1870.” (Dickens, p. 347)
*It’s interesting to note here that in 1870, Zion Hill Baptist Church in Keswick was founded in the home of Sister Kizzie and Brother Abraham Robinson, and later their church was built on land later deeded to them from Merrie Mills plantation then home of Edward S. Pegram, who worked on the Episcopal Diocesan Committee on Colored Churches in 1869 and later home of John Armstrong Chanler, a benefactor of Grace Church and Zion Hill Baptist.

In the 1870s the episcopal church was active in the education of former black slaves, and the church was segregated. Reverend Robb White served as a missionary for three years, and was appointed rector of Grace Church in 1882 -1885(following Reverend Ebenezer Boyden.) “During his years in Cismont, White reported that in spite of a total congregation of only forty-eight persons he had developed a Sunday School for African American pupils with 5 colored teachers and 160 pupils”. The thirst for education among the African American population was obvious and White apparently had a heart for the work. By contrast the sixty students in Sunday school at Christ church in 1882 were white. (Dickens, p. 352)

*From its first days as a parish in 1750, according to notes from Grace archives, black slaves attended Grace Church with their masters, and were seated in a balcony area built and reserved for that purpose. Grace Church member and local landowner whose family lives on part of the original Meriwether land grant Lee Gildea’s mother recalled the story that Rives includes in his history: (Rives, p.63) during the ministry of Rev. E.V. Jones (1889-1908) “an elderly black woman regularly attended services, sitting in the upstairs gallery. At communion time she could be heard descending the steps. Mrs. Jones waited for her and together they would be the last to go up for communion.”


In 1954 the U.S. Supreme court ruled racial segregation in the public schools was declared unconstitutional. In 1955, Presiding Bishop Arthur Lichtenburger wrote that,” Social discrimination and segregation are contrary to the mind of Christ and the will of God”-words that were passed as a resolution of the 1955 General Convention. The Diocese of Virginia followed the presiding bishop’s lead. In 1955, the boards of Shrine Mont and Roslyn retreats of the Episcopal Church in Virginia quickly ordered its summer camps desegregated. The Reverend Charles Fox, Vicar at Trinity Episcopal in Charlottesville, immediately urged the young people of his congregation to take advantage of this new opportunity for bridge building by attending the camps with young people from the white congregations.”

The vestry of Christ Church resisted, and under the leadership of a committee led by Judge George Coles (brother of Robert “Bobby” Coles of Cloverfields and descendent of afore mentioned Edward) resisted. Judge Coles drafted a resolution proposing segregation of the camps. His resolution “had no effect on the Diocesan resolve to end segregation”. The era of Massive Resistance engulfed Charlottesville, and Christ episcopal church in the 1950s. Area schools closed rather than be forced to integrate. The vestry of Christ Church allowed its Sunday School facilities to be used by the Charlottesville Educational Foundation, a white only, private school organization formed to provide education for whites during this time. “Charlottesville Schools reopened in 1959 due to court order, bit the all-white Rock Hill Academy continued to use the Christ Church Parish Hall for graduation ceremonies for three more years.” Judge Coles continued to resist integration, including a proposal of a restricted giving plan to respond in opposition to the more progressive actions of the National Council of Churches. This plan would serve to prevent donations from going to this more liberal organization. The plan continued for several years. (Dickens,p. 364-365)

*In Keswick, Grace Church did not officially resist integration, it is recorded in the meeting minutes that the vestry of Grace Church “discussed” the policy of integration, but nothing was done. According to Barclay Rives “History of Grace Church” —the 1960s saw many changes including the closing of the all- white school in Cismont. Reverend ‘Buck’ Carnan (1959-1964) advocated welcoming of visitors regardless of color (no encounter ever happens) 8 vestrymen oppose and resign, 4 remaining-including Corky Shackelford-went to Richmond to consult with Bishop Robert Gibson who wrote in letter to Carnan to “sit tight, be nice, and calm troubled waters” (Rives. P.105)
1964-New Vestry was created, Corky Shackelford serves on new Vestry along with Capt. R. Blair and two others. Rev Carnan resigned to go to a church in Newport News Virginia, and new vestry members were appointed.
In August of 2017 Christ Church found itself in the middle of the now infamous white supremacist rally. “The events of that Saturday in August were so scarring that Charlottesville received a visit by the presiding Bishop of the Protestant Episcopal Church of the US, the Most Reverend Michael Curry, who came to provide a measure of pastoral care for his flock in Charlottesville… He reflected’ We never fully resolved or brought to completion the issues that were engaged in the Civil war, or the War Between the States… the fundamental issues didn’t get resolved. And nobody in this room was there, and no one in this room did it, but we are stuck with it… Charlottesville. Virginia. Lift up your heads, straighten your backs, walk together. Walk together and work together and live the way of love until the love of God transforms this world.” (Dickens, p.374)
Working and walking together John DeKoven “Deke” Bowen, former Charlottesville police chief from 1971-1993 told me in a recent interview, was exactly the way the city handled problems during his time in service when there was a good rapport between blacks and whites. “We have gone backwards,” he told me, “and it’s very discouraging.” His thoughts are echoed by Dennis Morris of St. John Baptist Church in Cobham, who served as a Charlottesville police officer with Bowen during the 1980s. He said, “I just don’t understand what’s happening now. I don’t understand Charlottesville and how they do things. When Deke was in charge there were many more blacks on the force than there are now. We all worked together, we would talk things through and get together with Deke and the city [government] to work on things that came up. He listened to us and we worked things out.” From an interview with E. H. Sutton, October, 2020