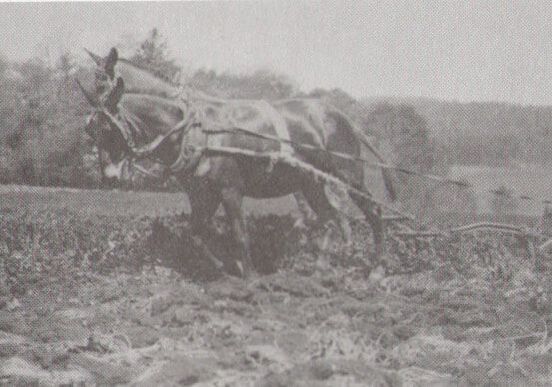 1800s - Bowlesville grew up around (Stephen?) Bowles’ blacksmith shop. Records show that Stephen Bowles was one of five black revolutionary war soldiers living in
Albemarle. (Lay, p.223), (but we do not know if this is the same person. BS)

*1804 - Haiti is granted independence from France.

**1819 -Edward Coles of Enniscorthy in southeastern Albemarle county (ancestor of Grace Church members Margaret Anderson, Sis Coles Merrick) was a prominent supporter of the Episcopal church and had himself freed all of his slaves and was subsequently elected Governor of Illinois based on his abolitionist views.
​
1820-1830 - Rev. Frederick Winslow Hatch served the parish

1832 - William C. Rives returns from France distressed to discover that Dr. Thomas Meriwether had cut the trees across from the entrance of Grace Church.

1846 - Stones were being quarried for the church’s construction.
1847 - James H. Terrell of Music Hall farm “freed all of his slaves on the condition that they would move to Liberia as part of the Liberian Colonization Society experiment.”
1847 - William Strickland designs Grace Church

**1849- Parochial records mention “New parish associated with Walker’s during the past year”: St. John’s church in Louisa at Greenspring, Rev. Ebenezer Boyden rector.
*1847-1860 – Author Garland Monroe’s detailed memories of life as a slave in Albemarle County are recorded in the Works Progress Administration’s Weevils in the Wheat.  Monroe recalls these events from his childhood in Albemarle County, which would have been sometime between 1848 and 1860.  His full statement reveals how some enslaved people in Albemarle County used informal spaces for religious worship; they were willing to risk severe punishment in order to do so.

1855 - New church is consecrated by Rev. William Meade, *effort to move old church to rear of the building but subsequent dismantling.

1860- Boyden publishes “The Epidemic of the Nineteenth Century” in defense of slavery.

*1860 -Six hundred six Free Blacks lived in Albemarle, under restrictions from the 1806 Virginia law that required them to leave the state within 12 months of their manumission. (Lay.p.223) According to Bates, in 1860 total number of Blacks outnumbered whites by approximately 2500. Kathie Woods notes the following:” Kirt von Daacke in his book, Freedom Has a Face,2012, traced Revolutionary War black soldiers because they were easier to follow, and concludes that free blacks led lives much more like poor white folks than like escaped slaves.   They often didn’t bother to register for decades and certainly didn’t leave the state within a year.  In fact, the families he’s studied lived lives that resulted from the reputations they’d managed to earn through honest living and the skills they’d learned.   They even sued other free blacks and whites when they thought they’d been cheated, and often won.”

**The annual council of the Diocese of Virginia accepts the recommendation for “the formation of people of color into separate and distinct congregations”. “Negros granted the right to establish their own separate congregations.” (Report of the racial Study Commission, 1960)
​

** August 12,1861- Lincoln issues a presidential proclamation calling for national prayer: “And I do earnestly recommend to all the people, and especially to all ministers and teachers of religion of all denominations and to all heads of families, to observe and keep that day according to their several creeds and modes of worship in all humility and with all religious solemnity, to the end that the united prayer of the nation may ascend to the Throne of Grace and bring down plentiful blessings upon our country.”

1863-1864 - Confederate soldiers camped in Bowlesville community. **(According to oral history from Dennis Morris of the St. John Road neighborhood, Union soldiers were chased from East Belmont farm where wounded confederate horses were being kept, and their escape route passed along Black Cat Road to what is now 250 east-hence the black Baptist church names “Union Grove” and Union Run” that are located there today.) According to oral history-Peter Hallock of Ben-Coolyn Farm says that there are graves on his property of formerly enslaved workers. His farm was originally part of Clarks Tract, and freed slaves were given or sold property at a low cost. This land transfer would be across the road from the entrance to Ben-Coolyn, off Black Cat Road (route 616) in a once all black neighborhood known as Bunker Hill, adjacent to Union Grove Church.

*1864 - Louisa H.A. Minor writes of slaves in her diary “Wait and Hope”.  Records show that free blacks were still treated badly, “in 1864 “Lizzie Burns, a free negress, waiting maid on the Central Railroad, was arrested yesterday, for using insulting and provoking language to a gentleman. She was carried before Justice Lobban, who ordered thirty stripes on her back.” (Lay, p.323 from the Daily Chronicle,11 March 1864)

**1869 - Grace Church was engaged in direct institutional outreach to the colored community from 1869, when Edward S. Pegram, then owner of Merrie Mill Plantation, was Grace Church’s lay delegate to the Annual Council and served on the first commission on Colored Churches as well as the Trustee of the Diocesan Schools. (KW 1-30-2021)

* 1870, January- Virginia was readmitted to the Union, freed blacks last names recorded in the U.S. Census.

**1870 -Zion Hill Baptist Church founded in the home of freed slaves, Abram and Keziah Robertson. Sources differ on the location and donation of the land where the building stands today. Bates says land was donated by John Armstrong Chaloner: “gives a portion of his land to the black community (Bates. P. 47) ** we have a discrepancy on this. Rives notes that Chanler is born in 1862, and comes to Merrie Mill upon his marriage in 1888. Changes his name to Chaloner in 1908. Zion Hill history indicates the land for their church was given by freed slaves, the Robertsons, in 1871. (see note for 1876)

**1872 - Ella Rives has a Sunday School built “where the parish hall now stands.” (Rives p. 60.) From the Parochial report: (KW 1-12-2021)   The first mention of a colored Grace communicant was in 1872, the year in which Ella Rives (daughter of Wm. Cabell and Judith Page Rives, and distant cousin to Barclay and Sandy Rives) arranged for a Sunday School building to be built about where our Parish Hall is now.  That suggested a need for such a building, and by 1878 the Diocesan record shows a colored Sunday school at Grace with 7 teachers and 80 students.
**1875 - The Civil Rights Act of 1875 was established to protect all citizens’ human and civil rights. Most importantly, it provided protection of equal rights to newly freed Black Americans. It stated that all native born or naturalized citizens have equal rights regardless of race, gender, or ethnicity. This Act caused uproar for some because of the regulation on public places. Many white business owners did not want the presence of black patrons and wanted to continue business as “white only”.
**1876 -July 21 Edward S. Pegram and his wife Lucy W. (Walker) Pegram, owners of Merrie Mill, sold to Abram Robertson and Keziah Robertson, his wife, for the sum of $365.00, a parcel of 18.25 acres of land on the Cobham Road starting at the corner of Robert Bird and Frederick W. Page’s land, thence along the Page’s line and the line of Rev. E. Boyden to Henry Sigourney’s line (with some lat/long….).   (research by Kathie Woods-Albemarle deed book p.461)

**1881 - August 2, deed by which Sam Johnson, Gary Jones and Andrew Johnson, trustees for the Church of St. John the Baptist, purchased for one dollar one acre of land from them on which to build a church.

1880 - Boyden’s resignation at age 77 reluctantly accepted by the vestry and his congregation. He died in 1891.

1883 - October 15 Supreme Court Stanley decision declared that the equal protection provision of the 14th amendment could be enforced only by the states. Effectively putting individual rights beyond federal protection.

January 9,1883 Property transfer one acre from Abram and Keziah Robertson to Henry Mitchell and Thomas Scott as trustees for Zion Hill Baptist Church (KW, Albemarle County deed records)
​**1888- John Armstrong Chanler comes to the neighborhood after his marriage to Rives. Among other acts of generosity that made him beloved in the neighborhood, he built the first swimming pool in Albemarle County at his estate Merrie Mill, along with a barn converted to a movie theatre to show silent films that had one quarter of the seats reserved for blacks.

1895 - Strickland’s original church burns down in a fire 2/9/1895 during the ministry of Rev. Jones; Chanler insurance policy instrumental in funding renovation work. Charles Edward Dickinson “receives no payment for rock hauled away from his farm, Rougemont” (Rives p.71)

**1895 - Black woman takes communion (Rives. P 64) mentions black woman attending with Mrs. Jones (Rev. Jones wife), seated in balcony (according to oral history: comment from Elizabeth Gildea to B. Rives) Parochial records confirm that “there was one colored communicant reported at Grace in at least 4 years when Boyden was rector, as well as in 18 years between 1884 and 1904.”

**1896 -The Supreme Court cited its Civil Rights Cases ruling in its landmark Plessy v. Ferguson decision declaring that requiring separate facilities for Black people and whites people was constitutional as long as those facilities were “equal” and that racial segregation itself did not amount to unlawful discrimination.